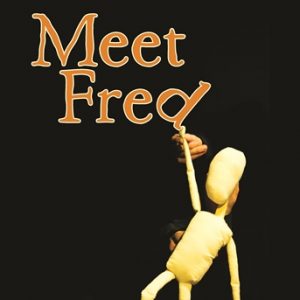 In Meet Fred, Hijinx Theatre Company skilfully entwine all that is existential – penis jokes to political anguish – through one puppet called Fred. Just go and see it for yourself – It’s apparent simplicity and inclusivity (perfectly mirrored in The Other Room) is its charm.

Advocating the collaborative process, not only does the Director (Ben Pettitt-Wade) direct, but he also showcases this role within the play. Fred’s sublime puppetry and movement shows an inspired devotion from Dan McGowan, Morgan Thomas and Craig Quat through harmonious craftsmanship. However, some of the acting (rooted in improvisation) was, consequently, forced but then, quite suddenly, frenziedly unrestrained – as actors stormed out of doors zealous and soap-operaesque. Yet, blazingly Dan McGowan projects his Fred. In fact, it is far too easy to allow yourself immersion in, solely, his performance. Do resist the temptation, the spectacle of meeting Fred is within its unification for artistic illusion/societal awakening.

Through Fred, parallels are seamlessly drawn to today’s political climax as the defenceless, in an increasingly self-serving society, are subjected to the status of a puppet. Fred is begrudgingly bearing witness to the rise of the mercenary, or consequently lumped in a box. ‘Don’t blame me, blame the system’ penetrates an air of, too blissful, comedic ease.

Pettitt-Wade’s illustration of a messy, ‘self-directed’ life branches from the flourishing/twining set design to the incorporating of the deceivingly metaphoric. A lot of life is incomparable, and unexplainable to others; the cast and crew seem to relish in this conception – ‘Rice is water.’ It rains harder on some.

For the cast, sustaining an audience’s full submission with such taxing content: an unfulfilling, tragically ‘acceptable’ and some-what accepted lifestyle of the oppressed is hard – especially as Meet Fred is a play only wholly satisfying after being digested. So, take friends, chuckle at the lavish littering of expletives, and take it for what it is. An oppressed puppet, an oppressed, emerging under-class, or a shout into the void? Hijinx are pioneering in their ability to make innovative, intelligent, inclusive theatre. Challenging stigma; enabling their disabled performers.