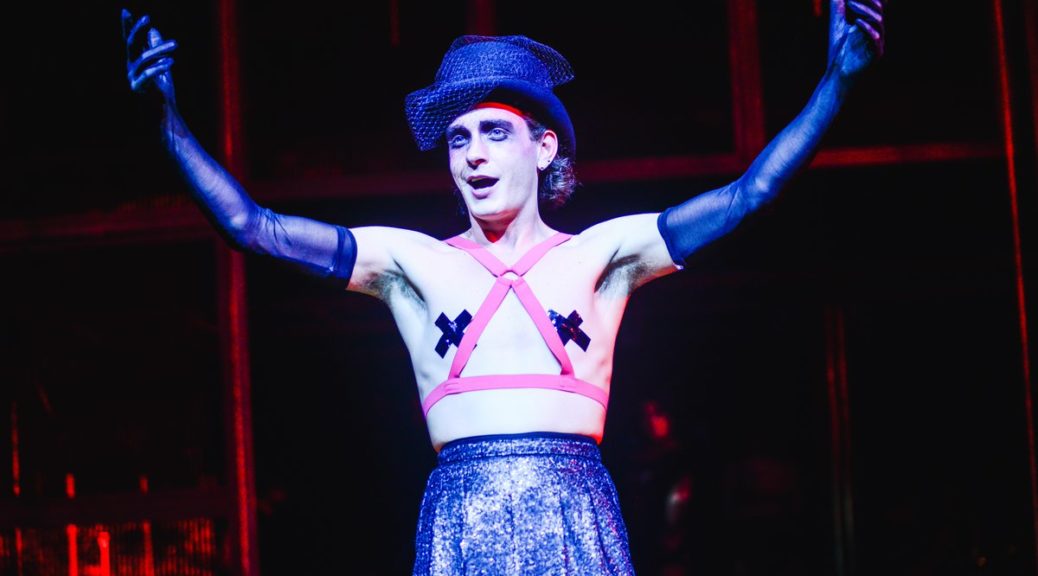 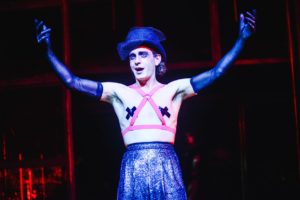 I go into the theatre weighed down by the recent slating on social media: in response to a comment in favour of collaborative working, I was compared to those who did nothing as Hitler rose to power. Troubling from all sides.

I hadn’t seen Cabaret for a very long time, if ever, and couldn’t say that I knew the story. Apposite as it turns out. We all know the songs but few of us know the context.

Partly it’s the space, partly it’s the artistic direction, but this is in your face from the start. And everything is in your face – teeth and tits and hips and all the grotesque of the carnival, smiling, enticing and taking you in. I watch the audience press back in their seats, personal space invaded and we are thrilled.

The story begins and like the train, rattles along happily. Two love stories unfold through song and speech – the older grocer and the landlady, the young American writer and the English show girl – against the light and dark and desperate of mid war Berlin.

The completely brilliant and mesmeric Master of Ceremonies holds each of us in his stare, winking and steely, welcoming and chilling. Better than Wayne Sleep, says my neighbour, he was evil too but ooh, this one makes me shudder. We all want him to notice us, take us into his lascivious dangerous, oh so colourful world.

Sally is sumptuous. Her voice purrs lines of love and confusion and roars and rises as the cabaret of her life is told. As it all unravels around her and the snippets of intrigue evolve into the political cabaret of Nazi Germany, we want her to leave, go to Paris with her man – but she hates Paris.

We witness the sadly comic and beautifully performed love affair of the Fraulein and the Frau over fruit and schnapps come together and fall apart and he leaves, his Jewish faith unwelcome now.

It ends. Our MC rides out with our battered journalist on his train home. He strips. His pink triangle stitched to his shirt. He folds into stage black.

I wish they sold CDs, says the lady in front of me. Oh, so do I. How much would I have relished hearing it all again on the way home. Brilliant, says another. Shocking, says someone else, hadn’t expected it to be so, well, sexual, not sure some of it was necessary. Wonderful, says a young man, reeling slightly.