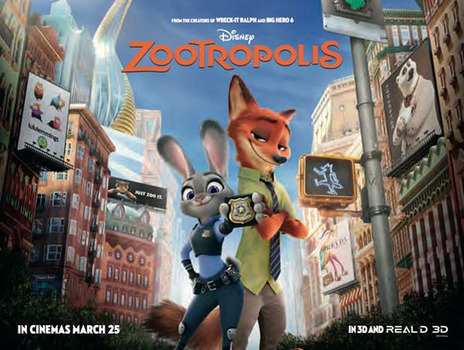 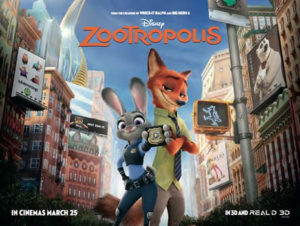 A movie needs many things to work. Mainly it needs story, characters and theme, it then needs to take the said elements and put them in an environment so they can cook together. Zootropolis is a movie that has all of these elements and may have a lot of cooks in the kitchen, but they all need to be there because they add to one element or another.

The world our story plays out in is one where animals existed as we know them but simply evolved to become sophisticated. There just simply didn’t seem to be any humans. They can now speak, wear clothes and have all the technology we have now. We are simultaneously introduced to Judy Hopes (Ginnifer Goodwin) a rabbit whose a bouncy fluff-ball of enthusiasm and smarts that grew-up on a farm but has big dreams of moving to the big city of Zootropolis where she will be a cop, make the world better etc. She enrolls in the academy where it seems like the cop life is not suited for a small rabbit, but she is indentured and does graduate. Now the big city awaits her.

The city of Zootropoilis is an architectural marvel. It is one of those locations that allows for many possibilities , serves as a great back drop for the characters and will inhabit your memories for years to come. It is on league with cities from Rintaro’s Metropolis, Terry Gilliam’s Brazil or Gotham City in Batman. We see all of the city, from the highs to the slums. Another neat part is that some of the skyscrapers are shaped like horns. Usually movies with anthropomorphic animals are all the same size, giving a little to let other animals be appropriately bigger or smaller. But here they remain the same size and it is the city that has adapted to accommodate all the different shapes and sizes. Pools for the hippos as well as dryers for them, little suction tubes to speedily transport the hamsters, different neighbourhoods with different weather simulators to create to right climate for the inhabitants natural environment.

And within the city area all the huge beasts and little critters that inhabit it. Every different species is given its own walk and body pose because naturally they have their own proportions. The wide range of furs, lighting, textures, clothing, environments that area all within this one film is so impressive. This is something that has ideas, skill and effort to bring it to life.

Along with it being great to look at there are even undertones. In this society that has descendants from a more beastly past (pun intended) there are remnants of that, some species typically don’t get along together because of their nature and others come with expectations based on their, literal, race. Yes, in this children’s Disney animated movie with anthropomorphic animals.

When Judy arrives there is a case of multiple predators going missing, her superior Chief Bogo (Idris Elba) assigns everyone a lead while she gets parking duty. While working she notices a fox in an elephant Ice-Cream store trying to buy a large lollipop for his son, the clerk refuses service but after some smart intervention from Judy he gets his pop. But it turns out this fox is a hustler named Nick Wilde (Jason Bateman) that uses the really big pop to turn into smaller ones and sell off to make a profit. Eventually events unfold and him and Judy are forced together as an unlikely partnership.

Any movie partnership needs them to be opposites. If they were the same then there would be no dynamic rendering it pointless. But also this brings out great character moments, Judy’s smarts but also naive optimism contrasts brilliantly with Nicks cynicism and dry wit. But none of them is ever truly the fool and they each bring something special to the situation that makes the whole greater than the sum of it’s parts.

There are constant jokes, as you’d expect from an animated children’s movie from Disney, but there is a much more heavy adult edge to their approach here. Nothing that is too edgy or inappropriate for children but will have the adults in the audience laughing just as hard as the children. One scene in particular that takes place at the DMV had the cinema I was in laughing very hard.

This movie is at the standard of The LEGO Movie. Because it being good would probably be no surprise. But it being this well thought-out with jokes that only make you laugh, but laugh hard and a deftly crafted script that throws in funny but seemingly pointless jokes that come back and play a part in the greater work.

Zootropolis works. It is many things and they all work together. It is a comedy with cute animals in it, you will be laughing throughout the movie. It’s also a social commentary, you’ll be moved by it’s poignancy. There’s also a mystery to solve, all the moments serve and lead and interweave together to a conclusion that is the right level of smart as well as clear enough to understand. The movie is simply a wonderful creation of feelings, smarts told with great characters within one of the great movie locations.