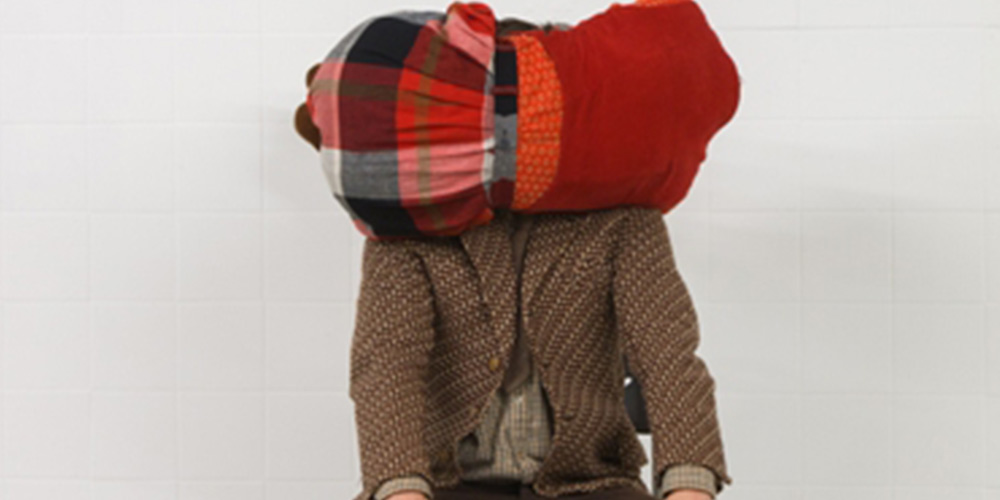 An audience of twenty, forming a circle, are the co-participants with Caitlin (wife of poet Dylan Thomas) in an Alcoholics Anonymous meeting. Walking into the lower room in Montgomery Town Hall, where the performance was staged, felt just like the home of a small town AA – complete with that faint hint of disinfectant. We were directed upstairs to a circle of plastic folding chairs – the red ones to be left empty. No lighting, no scenery just those empty red chairs and a few plastic glasses as props.

Deborah Light’s production, embracing dance, movement and speech with a backdrop of music and sound, is riveting from start to finish. As Caitlin, the elfin and lithe Eddie Ladd is perfectly balanced by the muscular dynamism of Gwyn Emberton as her talented alcoholic husband. Their expressive interpretation of these deeply flawed human beings shows every nuance of their relationship in all its turmoil: Caitlin’s love and passion for Thomas countering her rage and jealousy at – in no particular order – his three mistresses: his work, his drink and his other women. Her resentment at the repetitious, circular drudgery of her day to day life is flung in the face of his fame and success as a counterpoint to their passionate, and at times ferociously feral, relationship.

Perhaps the highlight of Gwyn’s portrayal of this genius is his enactment of the writer’s creative process – the agony, the boredom and the striving for what, in his mind, is an unattainable perfection as he negotiates a maze of words, as if plucking the pieces from a box to complete a jigsaw.

Mention must also be made of Light’s clever strategy in using those red chairs, seemingly brought to an inanimate life as they balanced, towered, swirled and fell as they were hurled around the floor, to add an extra dimension in reflecting the turmoil of the Thomas’s lives.

Gregynog Festival brought this production to Montgomery’s Dylan Thomas Centenary Weekend following earlier performances in Cardiff and Swansea, as Thomas’s, A Child’s Christmas in Wales was filmed here. It is Emberton’s home town and doubtless as a small boy watching the production he was set upon his artistic career. It showed in his passionate performance.

It was one of those rare evenings when one comes away, not talking about “the show”, “the performance” or even “the story” but engaged in and with the issues and pain portrayed – the last time I truly did that was in 1978 after seeing Tom Conti in “Whose life is it anyway?” With an audience of only twenty this deserves to travel from venue to venue for a very long time to come.