The next step to social networking is building your own online community Tom Beardshaw, cofounder of NativeHQ, explains how National Theatre Wales created its very own social network

Tom Beardshaw who has supported the Young Critics Scheme has writen an excellent article on NTW’s use of social networking and the ning platform to develop its community.
Tom mentions YC in his article.
Thanks Tom 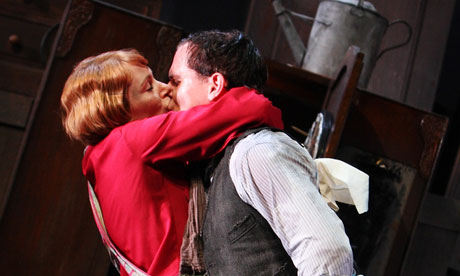 Get closer: National Theatre Wales uses its online community to engage audiences beyond its productions. Photograph: NTW.
National Theatre Wales (NTW) was born in 2009 when social media was rapidly mainstreaming and a new generation was becoming so familiar with online sharing, discussion, collaborating and creating their own media that it was like a second language.
The task facing NTW, and other arts organisations on the verge of this social media wave, was to harness that enthusiasm for social sharing, and to make sure the new generation of arts, culture and heritage professionals were properly and actively engaged.
So with a vision for nurturing an open, participatory creative community in Wales, NTW asked our social media company NativeHQ to build a public online networking space using Ning’s social network platform and help the organisation use it effectively to build an engaged community with a culture of sharing and discussing NTW’s work and their own.
The National Theatre Wales Community has grown with a spirit of experimentation, including careful decisions about how social software shapes the way culture, art and relationships form. It has depended on the generosity and involvement of its members and the commitment of all the NTW staff, led by their communications team, to share their creativity, lead discussions and debates, form specialist interest groups and connect individuals to new opportunities for creative work.
Through hosting a space that enables everyone to talk to each other, whether in public, group or private settings, we have found a way for NTW to engage a young generation in its own development. By sharing and enabling discussion of its work, the people affected by its policies have a say in shaping them and allowing other companies and artists to do the same.
Early in the development of the company, the theatre held online discussions with the community about the work it should commission, with actors about casting policies, with writers on their approach to handling scripts and commissions, and with critics on developing their work to grasp the opportunities the web offers to involve anyone in the discussion of creative productions.
John McGrath, artistic director at NTW, was quick to highlight the importance of the social network and the success of the theatre. “I regularly find myself turning to our online community for inspiration and ideas,” he said. “The sense that there’s a real dialogue going on there encourages people of all ages and experience levels to get involved.”
And what have been the results? Well, one initiative that has emerged from all this activity is a Young Critics group, which enables 13-25 year olds to support each other as they try to enter the somewhat difficult world of becoming an arts critic. They visit live performances, then blog their responses to the community and their own website, inviting discussion with both audiences and the works’ creators.
From there, we made the platform accessible so that all members of the community are included and invited to post about their work, the work of NTW, or any aspect of Welsh or international theatre. Groups for actors, writers, directors, designers and creatives are hosted by key NTW staff, enabling focused, professional discussions and allowing anyone to create a connection with leaders in their field. Other Welsh theatre companies host their own groups in the network and regularly post events to the site, making it one of the most useful places to find outwhat’s on in Wales.
NTW has moved beyond the social media basics of Facebook and Twitter by creating its own network that can host numerous conversations and debates, and this is helping it tackle the problem of how to engage with a younger generation, by giving them a public voice in the theatre community, and encouraging them to use it.
Young theatre makers, artists and audiences in Wales are showing that in a culture that newly enables them to speak with seasoned professionals, they have a huge contribution to bring to the revitalisation and growth of creativity and debate in the arts.
Tom Beardshaw is a consultant to National Theatre Wales – follow him on Twitter @tombeardshaw and the theatre @NTWtweets
This content is brought to you by Guardian Professional. To get more articles like this direct to your inbox, sign up free to become a member of the Culture Professionals Network.